History of the flag

Vexillology is a science about flags, their development, appearance and proper use.

The archaeological findings proved the using of the vexilloid which is the Latin name of the flag, standard, banner and standard as a textile identification sign when the silk was discovered and the Silky Road came into existence in the 3rd millennium BC. It had been the only one important but difficult and dangerous route as well from the east part to the west one for a long time. First flags were used for the identification and signalling on the battlefields. They were used as a panegyric decoration after the battles.

A powerful and large Mongol Empire upraised on the Sulk route where the business was placed, but it had been boldly overpriced by the rising taxes. Further development of the trade closely related with the development of the sea – going. The flags with a simple design and vivid colourfulness started being used because of easier identification of business and military ships in the distances. The flag was used as a symbol of sovereignty in the international sea lanes.

The flag of Denmark is called Dannebrog and it is the oldest flag which is used without any change from the 13th century and it was the example for the other northern states.

The Austrian flag comes from the year 1191, but it has noticed some changes. The current appearance was established in the year 1918 after the destruction of Austria – Hungary area.

The Dutch flag is the oldest tricolour, from the original orange – white – blue in the year 1630 was changed on the red – white – blue, because the orange colouring agent was unstable and the orange strip was changed on the red one. The original orange colour was the colour of the Prince William the Orange, who victoriously led the rebellion against the Spanish in the second half of the 16th century. Afterwards it was the pattern for the Russian flag and French flag and other tricolours.

The Russian flag was understood as a whole Slovak and in the revolution years 1848-1849 it became the pattern for Slovak nations, which were fighting for the freedom. The revolution efforts were pressed, but after the 1st world war and the destruction of Austria – Hungary area they reached their independency. They diversified from the prison of the nations and they used their own state flags with the tricolour in the Pan-Slovak colours completed by the state sign.

The flag of the United Kingdom and Northern Ireland is called Union Jack and it became the most extended flag in the world. Little Union Jack in the upper edge of the flag – canton – is placed on the flags of a lot of states which The United Kingdom had common bond and history.

The French flag is the symbol of the French revolution and the picture called Freedom leads human to the barricades from the French romantic painter Eugene Delacroix and it is the well known artistic representation of the flag.

The flag of the USA got in the furthest distance. American astronauts Neil Armstrong and Buzz Aldrin had left it on the Moon in the year 1969.

The flag of Nepal is unique because of its shape and it totally symbolizes Himalayas with the highest mountain of the world. Every year the climbers climb up on the top of it and they leave the flag of their country and the flag of Nepal on the Mount Everest.

The Olympic flag belongs to the most famous flags in the world and absolutely meets its noble message, which symbolizes five mixed – up rings. It joins all nations of the world on the sporting games.

The flag of the Red Cross and the Red Half - moon has special and individual place among the flags. These flags do not know the limits. They bring the help and the rescue. 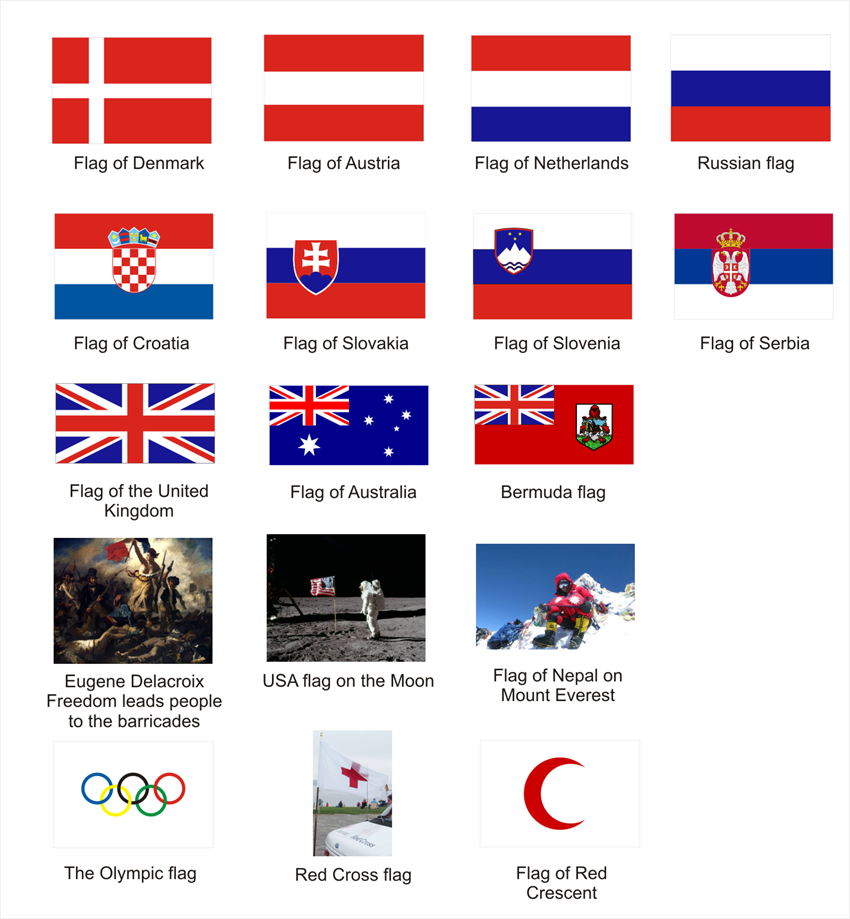