History of the slovak flag

The oldest known document about the flag in the area of Slovakia is the image of the crown flag on the seal of the city Nitra from 13th century.

In the Vienna picture chronicle is the image of the crown flag with the double cross on the three hills from the 14th century. In the Turoci chronical is shown the flag of the Hungary from the 15th century.

A document of national-revolutionary movement of Nicholas request of May 10, 1884, we learn that the original Slovak flag was red and white, similar to arrest the Czech and Polish. 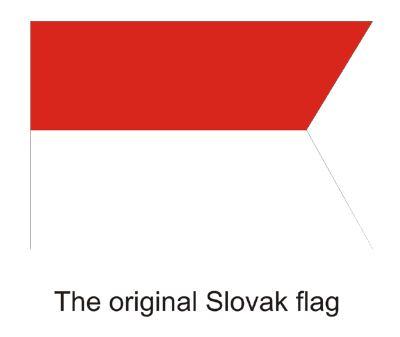 Revolutionary Movement perceived Czarism Russia as proud anyone converted, the largest independent state of the Slavs. Their desire for freedom expressed by downloading and using of the Russian flag, which was perceived as to be a subject, although real support and assistance was found in Bohemia. Sections Slovak volunteers on 18.09.1848 in the transition from Moravia to Slovakia swore on white-blue-red flag with the inscription: Hail to the King and freedom, brotherhood and unity, king and Slovak nation, fame meets Slovaks.

In Spis and Liptov- petition of 1868, is written that the Slovak nation should have the right to use its white-blue-red flag. The American Slovaks had Slovak flag in high esteem. On 25.11.1891 the first coopers' Association in Bayonne City righted and consecrated the first Slovak white-blue-red flag of the United States. Along with the American flag should be rectangular. In 1918, after the founding of Czechoslovakia, the Czechs used the historic white-red flag and Slovaks white-blue-red tricolor. The merging of the two flags was founded in 1920 shared the Czechoslovak flag that was used until 1992 with the forced break during the second World War.

Between 1939-1945 Slovak State used a flag with the white-blue-red tricolor. In connection with the renewal and the adoption of Russian historical flag as the national flag of Russia, to avoid confusion and confusion, was on 1.1.1993 the Slovak national emblem flag added. Red shield with a silver double cross on a blue three hills.

The double-cross came into to using as early as the 7th century in Byzantium. A simple Latin cross is explained as a cross of suffering. Double Cross is explained as a cross and resurrection victory. In the 9th century, the territory of present-day Slovakia was part of Great Moravia. Byzantium had a strong interest in the Central European country as evidenced by the sending of missionaries Mission St. Constantine - Cyril and Method.

During the 10th-11th century Slovakia was incorporated into the emerging Kingdom of Hungary, which has taken over cultural and political legacy of Great Moravia and double cross appeared on the coat of arms and coin Hungarian King Bela III.

The spread of religion but also a political symbol of the double-cross from Byzantium to other countries in the 12th century helped more like knights - in particular the Order of St. John, later the Knights of Malta - have taken over this symbol in their seals. King Bela IV. (1235-1270) after the devastating ravages of the Tartars tried to urban renewal. He invited German colonists and granted the town privileges. During his reign, many cities have begun to use in their seals and arms double cross.

These privileges were given only towns in Slovakia in Upper Hungary. Three hills a crisis first emerged in the 14th century, the coat of arms of the Hungarian King Wenceslaus - Ladislaus (1301-1305) and the 16th century symbolizes three hills of the northern mountains. There is the highest Tatra in the midle of the coat of arms, Matra is left, Fatra is right of the coat of arms. Territorial symbol of Upper Hungary with green three hills became a symbol of the nation living in Slovakia after the creation of an independent state was adopted as the national emblem of the modified three blue hills.